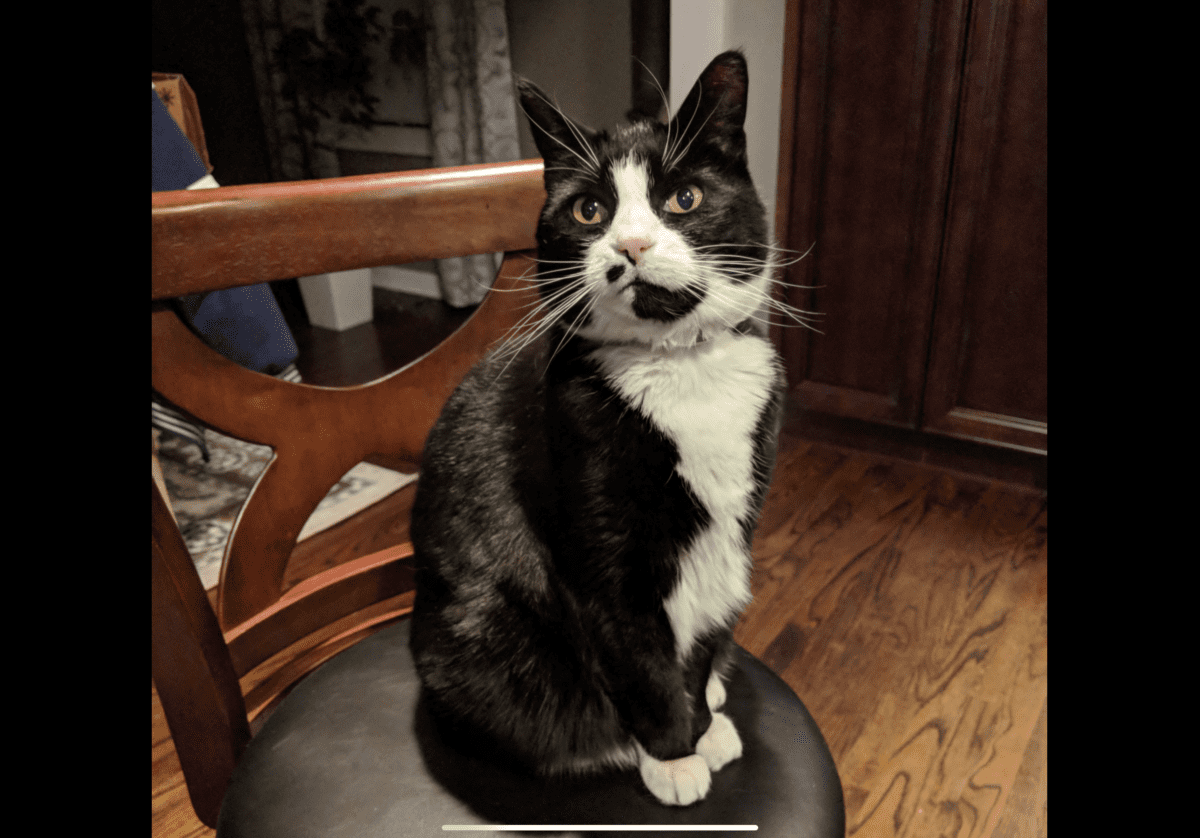 So this is Stanley, my senior cat who now has soft tissue sarcoma. This is my very dear friend of 18 years who has essentially never left my side. In elementary school he would walk me to and from the bus stop everyday, growing up he‘d sit there for hours and watch me swim in the pool, if I went wandering through the trails in the woods he’d follow behind. As a teenager when I’d come home from work, he’d come out to the car to get me and walk me back inside. Throughout college he stayed up every late night with me and participated in every zoom call, he was basically a member of the class. If I sit to eat he sits in the chair next to me, if I go downstairs to do laundry he goes downstairs to do laundry, if I go to the bathroom he goes to the bathroom, when I shower he’ll be waiting right outside, if I’m cooking he’ll stand on the counter and watch, if I’m cleaning the car he’ll sit in the car, if I’m gardening he’ll patrol the area for me and maybe a quick nap in the wheelbarrow. My point is that he’s been a very active participant in my life and truly the best friend I could have ever asked for. Any and every mundane activity- he wouldn’t miss for the world, and he made sure I was never alone.

He was always a healthy cat until roughly 2018. The only times we had issues were when he got into some kind of trouble with another animal outside and got hurt because he was an indoor/outdoor cat and spent most of his younger days outside, however he’s a fully indoor cat now. In 2018 basically he was just drinking a lot of water and losing weight and when he got blood work done it showed he had kidney issues, hyperthyroidism, pancreatitis. For the kidneys they gave him prescription food which he didn’t like but they said he needed limited protein so we tried to adjust his diet and it didn’t go so well and increasing his fats causes a flare up of pancreatitis and nausea and then he eats less and throws up and loses more weight and he’s already got a fast metabolism with the thyroid issues so it’s all kind of like a cycle we’ve been managing but he’s been doing okay. For the thyroid he’s on methimazole. He’s been basically around 8 pounds so he’s small but we’ve been trying to get him to eat as much as possible and everytime we’ve done repeat blood work they say the thyroids perfect and the kidneys haven’t gotten worse so he’s just been maintaining where he’s at.

Come august 2021 a small bump appears on his arm. We bring him to the vet right away and they said they think it’s an ingrown hair and that was that. I guess it was their way of saying they don’t know. The bump continued to grow and at a certain point I knew the ingrown hair thing made no sense. I made another appointment and they couldn’t get him in for two weeks. When I brought him in they said the bump has grown significantly and how they never want to see bumps like this on cats. Just in the way they were talking it was clear they expected it was cancer. They said I could do a biopsy if I wanted but they were acting like that was not worth it to do and I was like well what are the options? They said if it was cancer the only option is amputating the arm and if it’s not cancer then I guess you just know it’s not that. Okay well we have to do something we can’t just leave him like this. They said the mass felt like it was part solid part fluid and I was like can you drain some of it to relieve pressure and they said during the biopsy anything in there would drain. Well alright so let’s go ahead and do that… 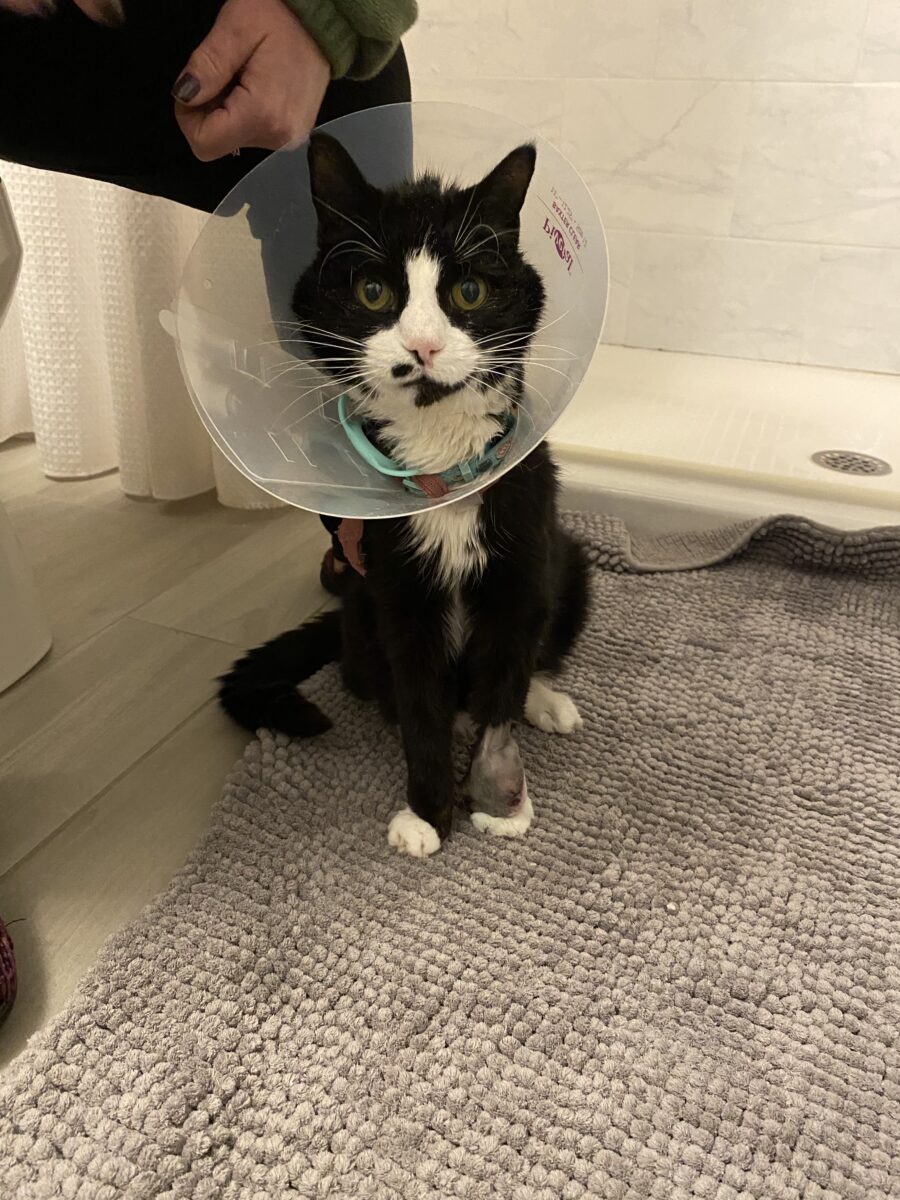 He gets the biopsy done and they said we’d get the results in 5-7 days. When he came home he had a cone on his head which he really didn’t like. They said he needed it for 2 weeks but he wasn’t messing with his arm and he sleeps most of the day so we took it off and he never messed with it. He was acting like himself for a few days and then he starting not acting like himself… not really eating or drinking, wouldn’t come to bed, not being affectionate just staying to himself, more nauseous than usual and throwing up bile. At the same time we also got the results from the vet that he has cancer. He’s got soft tissue sarcoma and they said he can get his arm amputated but they said its a very high risk surgery and he may not make it through it. They said with younger cats the recovery is 2 months but for him it would be much longer if he even survives. It feels like they just think “he’s 18 he‘s lived long enough it’s a waste of time.” They had this attitude about the biopsy like they didn’t even want to bother doing that. I want to do what’s best for him but I’m feeling a lack of trust in their judgement, especially because I brought him in when the bump was very small and they just sent him away. Yet later they told me bumps in cats are bad and they never want to see bumps, and how they see lumps and bumps in dogs all the time and it’s okay. I think from the start they just couldn’t be bothered which is disheartening. I called the vet the minute they opened for an emergency visit and said he needed to come in because he was nauseous and wasn’t feeling well. I wanted him to get a nausea shot and IV fluids plus his thyroid pill since he hasn’t gotten that (it goes in his food and he wasn’t eating) and go from there. When there he got those things, and he had lost another pound since he was just there so he was 6.5 pounds. I said I wanted him on daily nausea meds, and they also gave me an appetite stimulator to give him daily. I asked if they had food recommendations or anything for weight gain and they sent me home with two cans of food to try. I wonder why they didnt offer this sooner as we’ve been trying to get him to gain weight for quite some time. I don’t like to wait until a critical point. Since then a few days ago we don’t put his medicine in his food at all anymore we just put it in syringes and in his mouth to make sure he gets it.

While I was there I discussed the cancer options with the vet and she was trying to persuade me into just letting him die. She said his arm would keep growing rapidly as it has been until it rips open and oozes and bleeds and gets infected and is painful and then it’ll be time to put him down and she said he’d have a few months to live. It really sounds unethical to me to let him suffer in pain for a few months to inevitably have to put him down. They say we’d control his pain but already it doesn’t seem like we’re doing a great job. She said specifically to me that it would be a waste of money and I found that a bit insulting because I’m not asking for that opinion. I said to her I’m not concerned about the money. I’m a nurse and I work hard and there’s no shortage of work as we all know and I would work every single day if I had to to pay for whatever Stanley needs. She was very blatant in her opinion and was just acting like surgery was a bad option and he’s a lost cause. She also said she thinks his nausea is his kidneys shutting down, and I asked her why she thinks that when previously they told us his nausea was related to his pancreatitis. Her response was that she doesn‘t know she’d need blood work- well perhaps blood work would be in order for the kidneys as well with that claim? It felt as if she was trying to knock any bit of hope out of me.

So I went home with him and was distraught and he still wasn’t eating great or coming to bed. I have a ring camera set up to where he’s been sleeping and I was watching it and saw him limping and realized he was in pain and was just hiding it really well and the next day we got pain meds from the vet and since giving him those regularly he’s doing better, he’s come back to bed, and it’s taken effort on our part but we’re working on getting him to eat. He’s been doing great drinking on his own. I think the new meds take some time to kick in and we‘ve been trying to let him eat on his own but as needed I’ll put syringes of food in his mouth. It seems that the pain threw him off course here where we had otherwise been maintaining all his conditions. Am I in denial to think perhaps it’s possible if the arm was amputated and you get rid of this new cancer issue, we can just go back to how we were doing? And the new meds and new food can help him put the weight back on that he lost with the recent issues?

I’m on a time constraint and I need to make a decision. Everyone I’ve talked to has immediately been like “amputation that’s cruel!” Even that was my first thought, but it’s a simple minded thought and you have to really consider the alternative. Which is having cancer take over him and causing pain until his arm rips open and is oozing and he has to be put down. The rest of his life wouldn’t really have a quality of life it would be all medications around the clock. With amputation he has to learn to live on 3 legs but maybe he’ll get back to a life without pain and another summer (or 2 or 3 :D)to roll around on the deck in the sun and listen to the birds. But maybe my vet is right and amputation is a bad decision. Maybe he won’t make it. But if I do nothing he definitely won’t make it. Maybe he will and recovery will be hard. I don’t know what to expect. It’s a scary and hard decision to make. I’d love to hear from other people who have cats of similar ages, similar weights, similar health histories who have undergone amputation and what the outcomes were- good or bad. I want to make the best decision for Stanley, not for me. As much as I’m scared of life without him, the priority is how to help him and what’s best for him. Any and all thoughts are welcome.

This site uses Akismet to reduce spam. Learn how your comment data is processed.

About Your Tripawds Blog:

New Tripawds Bloggers: Please review your default first blog post for help getting started with your blog or review the Help Videos in your dashboard. Edit these widgets from your Appearance settings to remove this notice, upload a custom header photo, or choose from 130+ themes, and much more!